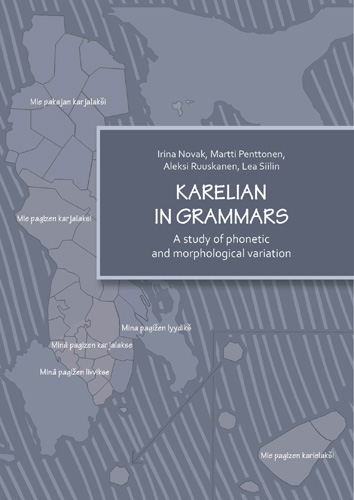 Irina Novak, Martti Penttonen, Aleksi Ruuskanen, Lea Siilin.
Karelian in grammars. A study of phonetic and morphological variation
Scientific electronic edition, 2022.
The endangered Karelian language is spoken in two countries, Finland and Russia. For 150 years, Finnish and Russian linguists have written grammatical descriptions of Karelian and its varieties. The aim of this study is to summarise the diversity of the Karelian language and to point out the similarities and differences between its varieties. To this end, 21 grammatical descriptions have been analysed and compared in terms of phonetics, phonology, and morphology. Our research material comprises seven published and six unpublished descriptive grammars and also eight normative ones.
All varieties of Karelian are represented — Karelian Proper by nine, Livvi-Karelian by six, and Ludic by three grammatical descriptions, while three grammars represent the grammatical systems of common literary language varieties. Our comparative data are presented in 76 tables and commented from the point of view of linguistic variation. The study shows how and to what extent normative grammars are based on descriptive ones. Also, there are grammatical categories in Karelian on which there is little or no research. To fill in some of these gaps, the data in the grammars have been supplemented by information available in other studies, language samples, and the dialect data in Karjalan kielen murrekartasto [Dialect atlas of the Karelian language] (1997).
The results of our study support the view of Karelian as a single language with diverse phonetic and morphological variation characteristic to any living language. Differences between the varieties are more pronounced in terms of phonetics, whereas they are considerably more similar in terms of morphology, which shows their common grammatical structure. In a continuum of linguistic variation, differences between the varieties are explained to a great extent by linguistic contacts with other closely related languages and with Russian. Features shared by Karelian varieties and those that vary between them are summarised and examined with cluster maps. The most regionally homogeneous variety of Karelian is Livvi-Karelian. The influence of linguistic contacts is most pronounced in Ludic. Viena Karelian is rather unified, whereas the geographical isolatedness of the South Karelian varieties from one another has resulted in dialect differences. The interinfluence of South Karelian and Livvi-Karelian is most pronounced in the dialects of the former Finnish Border Karelia.

Karelian in grammars. A study of phonetic and morphological variation (11.64 Mb, скачиваний: 7)